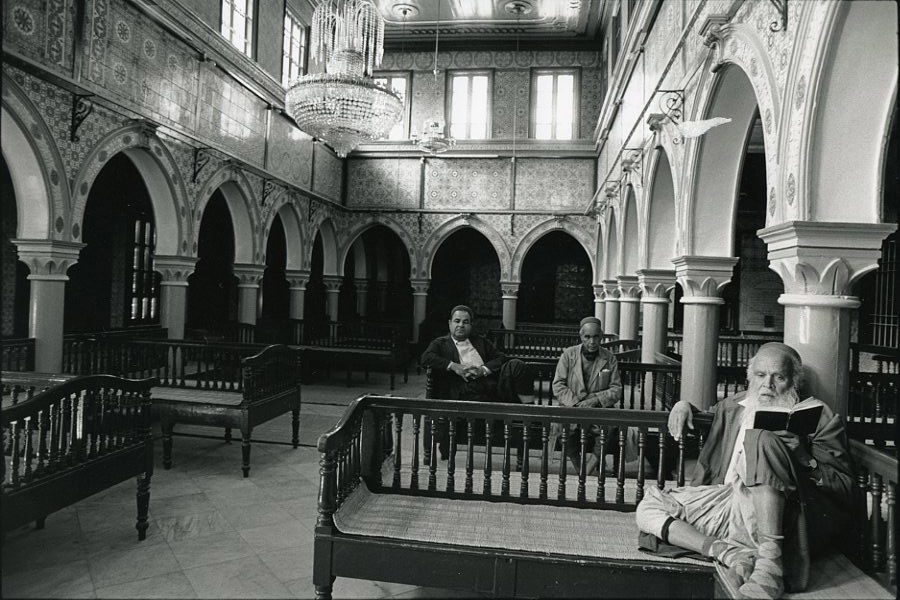 This is the El-Ghriba Synagogue on the Tunisian island of Djerba. Although the current building was constructed in 1929, it is believed that a synagogue has existed on this site for 2,000 years. According to tradition, the first synagogue on the spot was built with a stone from the destroyed Temple in Jerusalem. If you look closely at the patterns, shapes, and motifs in the picture, you can see how the builders of this synagogue were influenced by Muslim art and culture. In 2002, after this picture was taken, al-Qaeda tried to bomb the synagogue. The building was not destroyed, but about 20 tourists and local workers were killed.

Why do you think the photographer called this photo Waiting for Seven Jews?

Hillel said,
“Don’t separate yourself from the community.
Don’t be overconfident until the day of your death.
Don’t judge your fellow human being until you have reached that person’s place.
Don’t say anything that is unintelligible with the hope that it will be understood.
And don’t say, ‘When I have leisure I will study’ – perhaps you will never have that leisure.”
– Pirkei Avot 2:4

Nine tzaddikim cannot make a minyan, but if one common man joins them, he completes the minyan.
– Rabbi Nahman of Bratslav