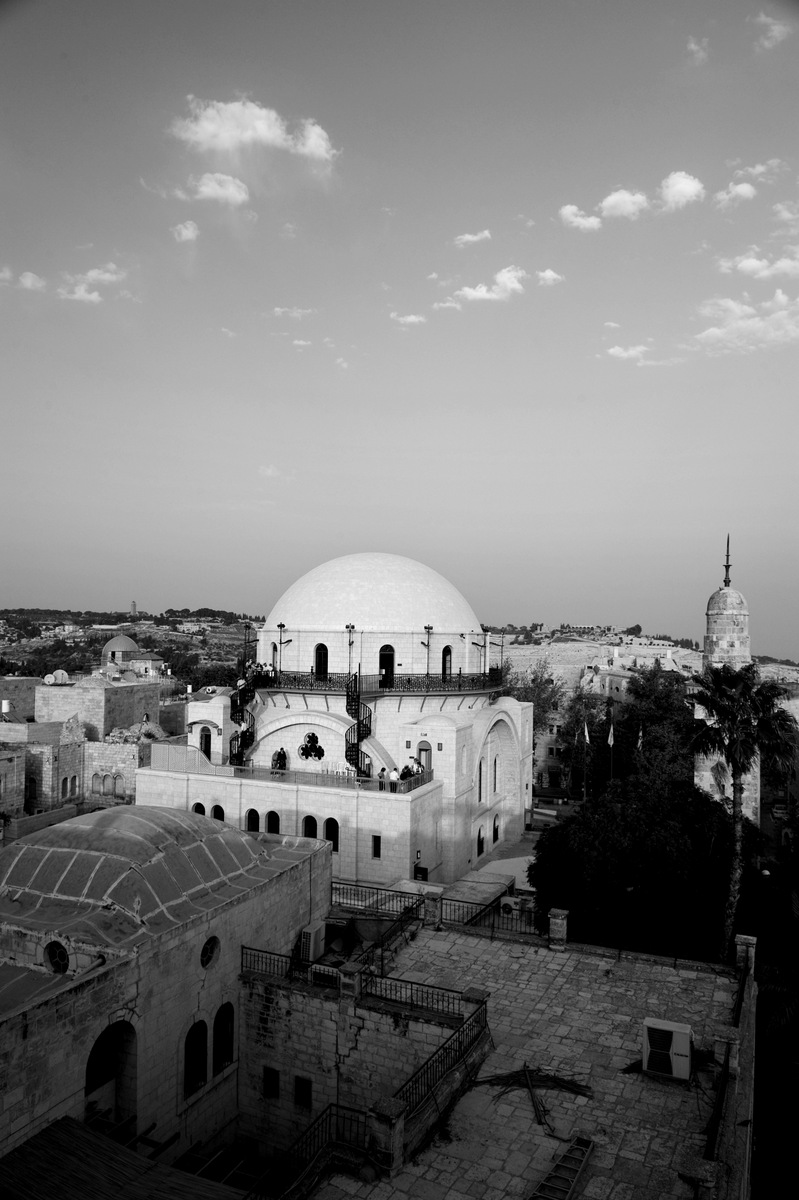 The Hurva synagogue now stands in the center of Jerusalem’s Jewish Quarter, but its long and dramatic history serves as a reminder of the struggles for control over the city and its neighborhoods. The original synagogue on this site was built in the early 18th century, when a group of European Jews dedicated to mysticism came to the city to try to advance the coming of the Messiah. The followers of Rabbi Judah the Hassid had to pay off the Ottoman Authorities to build and have them finance the building. The group went deeply into debt and ended up being imprisoned. In 1721 the synagogue was burnt down and the Ashkenazim were forbidden from entering the city again. After this, the European immigrants who came to Jerusalem would disguise themselves as Mizrahi/Sephardim from the Middle East. For nearly a century, city life went on around the ruin (hurva) of the synagogue until in the early-1800s when the Perushim, a group of Jews from Lithuania, decided to rebuild the sanctuary to restore Ashkenazi life to Jerusalem and to take part in an act of repairing the world to advance the coming of the Messiah. Having received an imperial decree that the prior debts would not be held against them, construction on the synagogue began on the eighth day of Hanukkah in 1855, and the neo-Byzantine style synagogue became one of the largest buildings in the city as well as the most important Ashkenazi synagogue. It remained an impressive building for almost 100 years until Israel’s War of Independence in 1948 when Jordanian forces destroyed the synagogue, a stronghold of the Jewish Haganah force, and captured the Jewish Quarter, thereby dividing the city for 19 years. In 1967, Israel reclaimed the quarter during the Six Day War and various plans were drawn up for the site. However, nothing could be agreed upon. Finally in 1977, as a symbolic gesture, the thin arch from the north wall which had supported the synagogue’s iconic large dome was reconstructed with original stone from the site. In 2000, plans by Israeli architect Nahum Meltzer to rebuild the synagogue faithful to the original 19th century neo-Byzantine designs were approved by the Israeli government, and the building was completed and dedicated in March 2010.

In addition to this image of the completed synagogue, Zion Ozeri had taken a similar photograph from almost the same vantage point years ago, before the restoration and all you could see was the arch. In speaking about the current photo, he says, “Here I tried to take this photo from the same vantage point as my original photo. First I had to get permission from the family that had an apartment that is overlooking the synagogue … I had to climb… it was not easy. I had to go from house to house and find which house had the view I needed. Some people were not home, or they were home and they said no. Finally I found a house where I liked the vantage point. I had to climb on top of whatever I had to climb to take the image, and I took a few images, and it’s interesting because that older image doesn’t exist anymore in reality.”