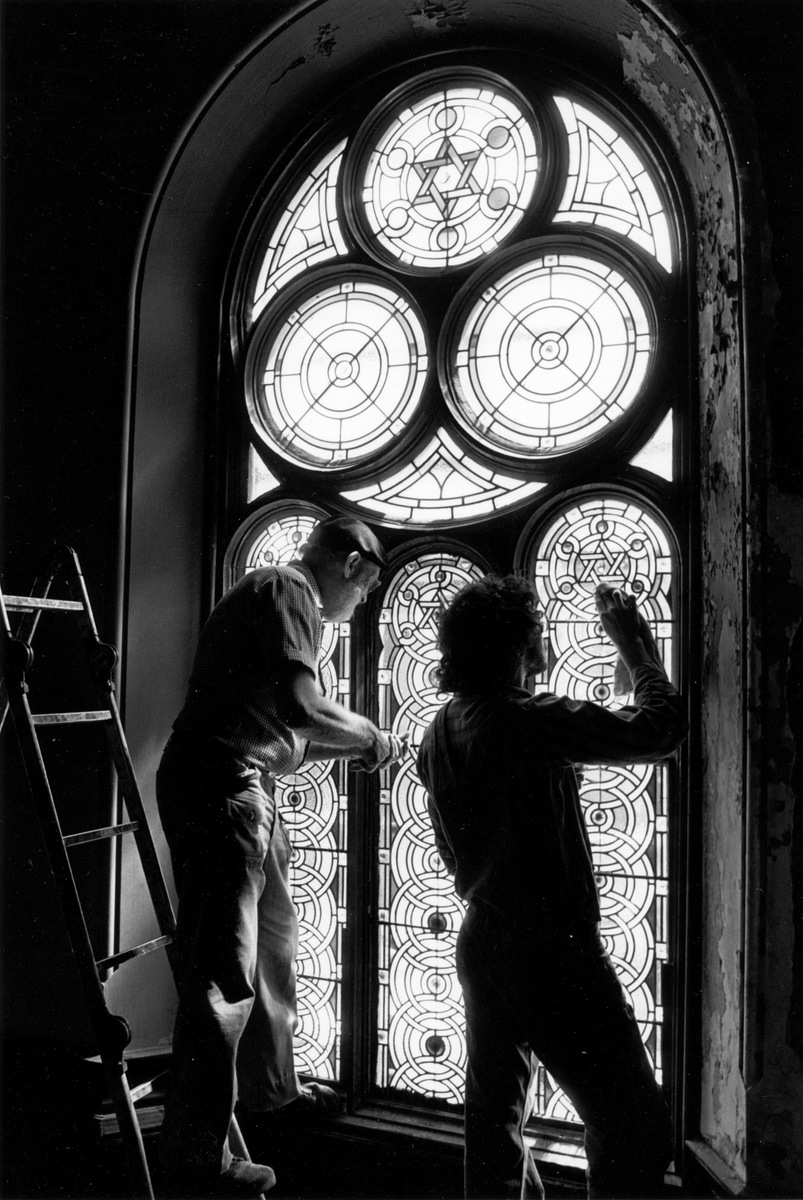 In this image artisans work to restore the stained glass windows in one of New York’s oldest and most majestic synagogues, the Eldridge St. Synagogue. The origins of the Kahal Adath Jeshurun congregation and their temple reflect the Lower-East Side neighborhood’s diverse group of immigrants in 1887: it was constructed by two Catholic brothers from Germany for a congregation of mostly Orthodox Polish Jews with a rabbi from St. Petersburg, Russia. The synagogue’s cantor was Pinhas Minkowsky, known as the “Sweet Singer of Israel,” who was hired away from a post in Odessa, Ukraine with the offer of a rich salary in America.

The building is remarkable for its architectural style. With a vaulted ceiling and large rose window, it could compete with the city’s lavish churches, but it was also decorated with dozens of Stars of David inside and out, celebrating America’s freedom to openly worship any religion. Despite the lavish design, membership at Adath Jeshurun spanned the entire spectrum of occupations in the Lower East Side. According to an 1892 account, inside you could find “lawyers, merchants, artisans, clerks, peddlers and laborers” all praying together. However, in the 1920s, the community began to decline, and after World War II many Jews left the Lower East Side and moved to the suburbs. Like other synagogues in the neighborhood, fewer attendees at Eldridge Street meant that the main sanctuary was used less frequently and it fell into disrepair. A small but dedicated congregation continues to use a more intimate space in the building’s basement.

In the 1990s a non-sectarian group, the Eldridge Street Project, worked to have the building designated a National Historic Landmark and raised almost $20 million to restore the sanctuary. Zion Ozeri’s photograph is from this period. Since then, the sanctuary has been transformed into the Museum at Eldridge Street, which tells the story of Jewish immigrant life of the Lower East Side. To complete the restoration, the museum commissioned a new stained-glass rose window which was designed by artist Kiki Smith and architect Deborah Gans and installed in 2010. The Jewish star and celestial veil motif of the round window restores the sanctuary to its original splendor. Although the Eldridge Street Synagogue is once again a landmark of the neighborhood, Jewish life in the community overall is an echo of it what it was at its height. Nevertheless, there is still a matzah factory, a mikveh as well as many historic synagogues and tenement buildings with Hebraic decorations, built by the same Catholic brothers who first raised the synagogue for Kahal Adath Jeshurun.