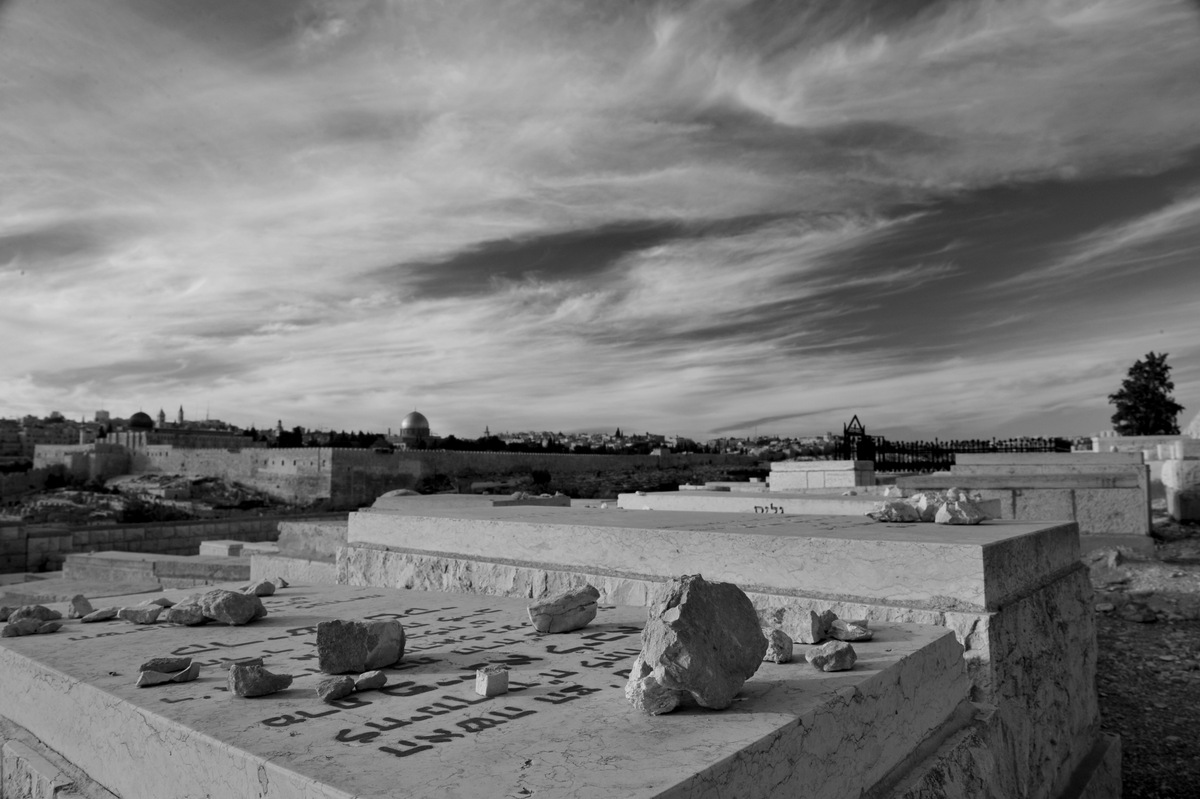 Here is a photograph of The Mount of Olives (Har HaZeitim) with the walls of Jerusalem’s Old City and the rotunda of the Dome of the Rock in the distance. Once covered in olive groves, The Mount of Olives has been used for burials since Biblical times and is referenced in writings from the time of the Hebrew kings of Judea. Since believers of the messianic tradition think that when the Messiah comes, those buried on the mount will have their souls resurrected first, the site has become a place of honor and is highly sought after as a burial site. Among those interred are medieval sages, rabbis, Nobel Prize laureates, as well as cultural and political figures including Eliezer Ben-Yehuda, the father of modern Hebrew, and Israel’s sixth prime minister, Menachem Begin.

Placing small rocks and pebbles on the gravestones is part of a Jewish tradition as old as biblical times when graves were marked by mounds of stones, rather than a single upright inscribed gravestone. Back then, replacing the rocks helped maintain the pile and perpetuate the memory at the site. Today, the tradition allows mourners to participate in the mitzvah of burying the dead.

The site has not always been exclusively for the final life cycle ritual. Among the trove of documents from the ancient Cairo geniza are fragments dating from the 11th century that ask about the kosher qualifications of cheese produced by Karaite Jews in a dairy factory on the mountain.

When working with an often photographed subject such as this iconic location, photographer Zion Ozeri says that he challenges himself by thinking, “How am I going to say it? How am I going to express something with eloquence? How am I going to compose it?” He continues, “Sometimes I am happy with the result, and many times, after I think ‘oh, nothing special, we’ve seen that before.’ What I want is to be able to show something and say ‘okay, this is a perspective that we haven’t seen.’”

What is the angle Ozeri uses in this photograph? How does it help tell a story? The Dome of the Rock is gold and can be hard to look at in the bright sun. How does the fact that this photo is in black and white help tell Ozeri’s story? How or would it change if the photo was in color?