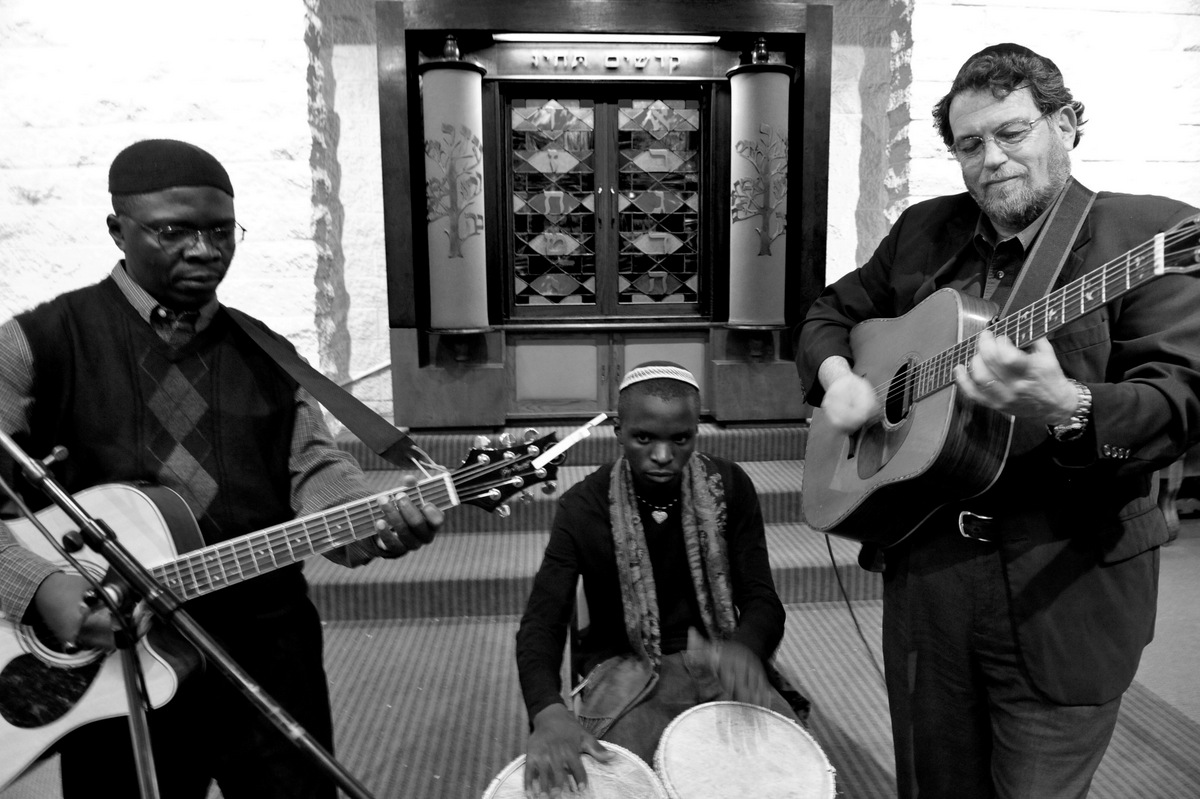 In this Californian synagogue, two musicians from Uganda, a landlocked country in East Africa, join their friend Cantor Mike Stein (right) in song at Temple Aliyah. Rabbi Gershom Sizomu (left) and his son Igaal (center), come from a small but dedicated community known as the Abayudaya (“People of Judah” in Luganda, the local language), that has been practicing Judaism for almost 100 years, even through times of poverty and dictatorial repression in the 1970s. In 1919 their first leader rejected his British colonial contacts and their Protestantism and established his community by using just the first half of a Christian missionary’s bible that contains the Five Books of Moses. As a result, they did not practice the same Rabbinic-era traditions that Jews of the Diaspora take for granted, like B’nai Mitzvot. Instead, in a tradition since 1928, boys who can read a translation of the Bible, as well as recite Torah prayers in Hebrew are called ‘rabbi’ and are responsible for passing along religious knowledge among the community. Today, Hebrew is taught to children in the Hadassah Nursery School and in primary and secondary schools. The Abayudaya’s Hebrew dialect draws on the pronunciation of their Luganda language, where words end with a vowel sound. As a result, when they sing a song like Hinei Ma Tov, ‘Tov’ (good) becomes ‘Tovu’ and ‘Shevet’ (sit) becomes ‘Sheveti.’ Due to electronic communication and the travels of Ugandan Jews in North America, as well as Jews from around the world visiting their town, the Abayudaya’s musical repertoire infuses more traditional Hebrew liturgy as well as worldwide melodies and Hassidic nigunim (melodies), but at its core is a fusion of prayer with the popular musical traditions of south and east Africa. Recordings of the Abayudaya singing in Hebrew, English and Luganda have been made and are available online.