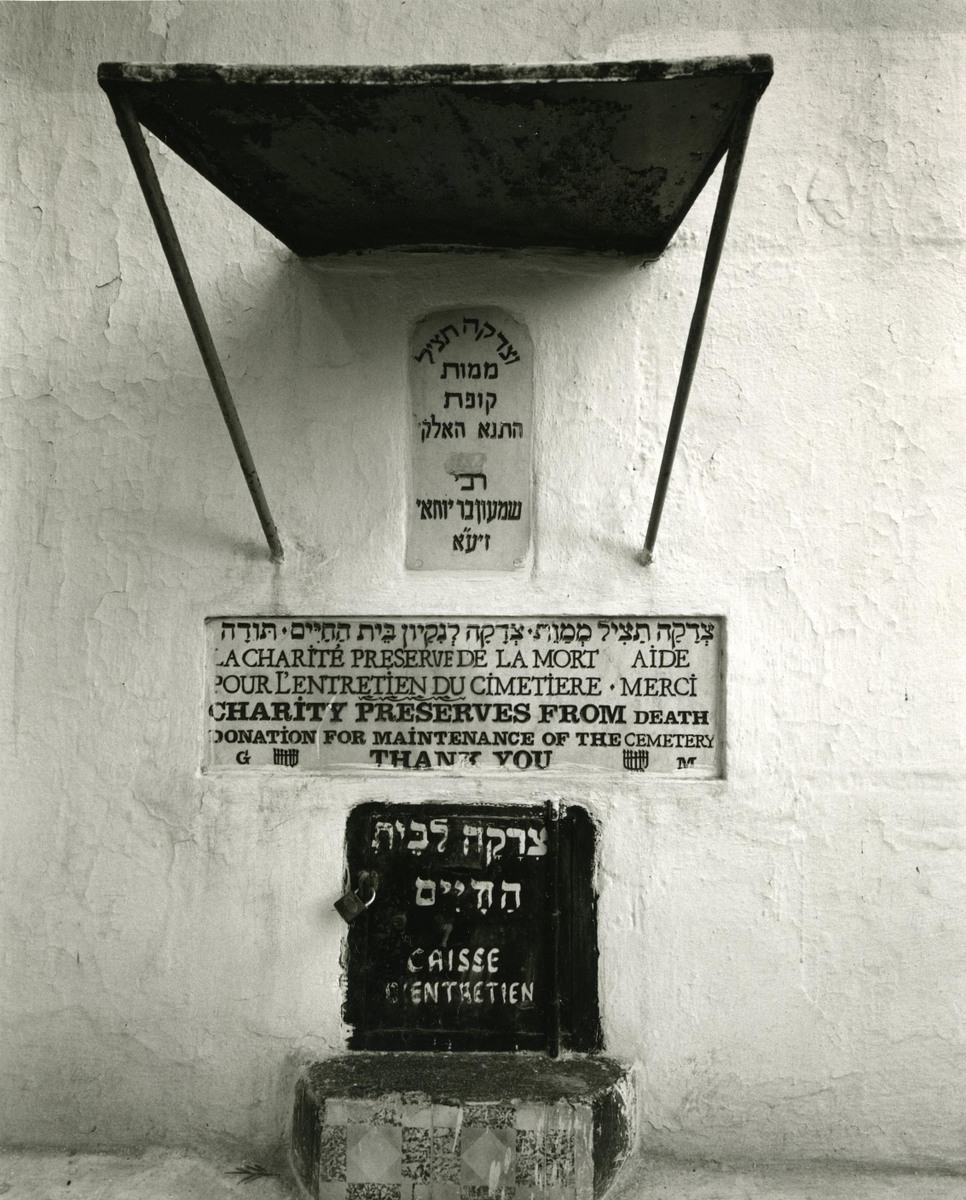 “Charity preserves from death” is the phrase repeated in Hebrew, English, and French on this charity box at the Jewish cemetery in Fez, Morocco. The phrase comes from the book of Proverbs (10:2). But, it’s not entirely clear who is delivered from death. Is the deceased delivered from a harsh judgment in the world to come when the living give charity in his or her memory? Is the giver delivered from evil by the good deed? Or is it the recipient of the charity who is delivered from hunger and suffering? Whatever the answer, Jewish tradition emphasizes acts of tzedakah at times of mourning. Giving tzedakah reminds us of our obligation to the living and helps translate our grief into tikkun olam, repairing the world. Giving to causes supported by the deceased also helps keep the person’s memory alive.

Money deposited in this charity box goes to maintain the beit ha-hayim, literally, “house of life” (a euphemism for “cemetery”). This cemetery is one of the few remaining vestiges of the Jewish community in the city of Fez. Although the city was once an important center for Jewish study and culture, today only about 150 Jews live in Fez.

Jews have been in Morocco for more than 2,000 years. Although it’s not easy being a Jew in a Muslim country, the Moroccan community has fared relatively well, at least in the last hundred years. During World War II, King Muhammed V protected the Jews of his country from deportation to concentration camps. After the war, there were more than a quarter of a million Jews in Morocco. Most, however, have since left for Israel, France, the U.S., or Canada. Today, there are only about four or five thousand Jews left in Morocco—mainly in the city of Casablanca. But the community has retained its strong religious commitment and its unique traditions, including annual pilgrimages to the tombs of holy sages.

Why should I dread days of evil,
When the iniquity of my enemies surrounds me?
They depend on their wealth and take pride in their riches.
But a man cannot save his dearest from death,
He cannot ransom himself from the decree of the Lord;
He cannot buy immortality, he cannot evade the grave.
– Psalms (Tehilim)  49:6-10

Rabbi Judah said: Ten strong things have been created in the world. The rock of the mountain is hard, but iron cleaves it. Iron is hard, but fire softens it. Fire is powerful, but water quenches it. Water is heavy, but clouds bear it. Clouds are thick, but wind scatters them. Wind is strong, but a body resists it. A body is strong, but fear crushes it. Fear is powerful, but wine banishes it. Wine is strong, but sleep works it off. Death is stronger than all, yet charity delivers from death. As it is written [in Proverbs], “Charity delivers from death.”
– Babylonian Talmud, Bava Batra 10a

Blessed are You, Lord our God, Ruler of the Universe, who are the Judge of the Truth.
– Blessing recited upon hearing news of someone’s death.