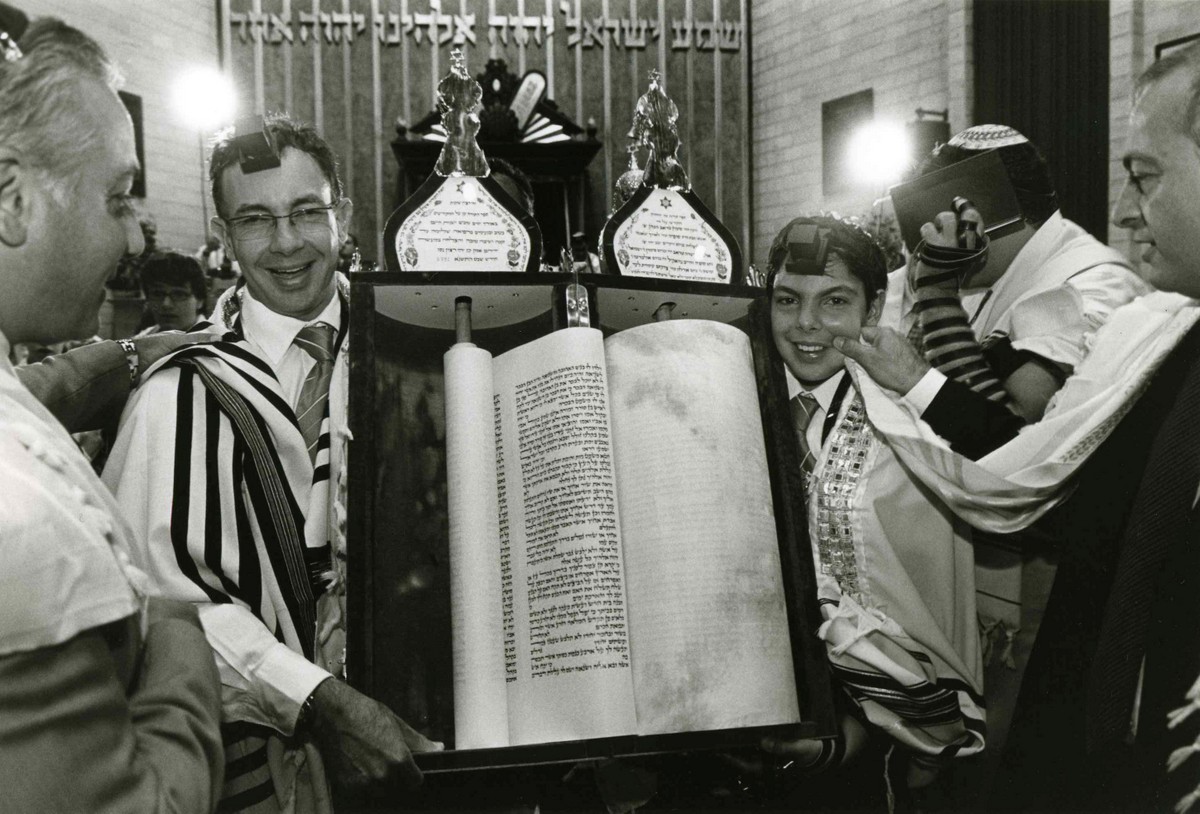 What does it mean to become a Bar Mitzvah? Among other things, it means being obligated to carry out the mitzvot that apply to all Jewish adults. For the young man in this photograph, it means wearing tallit and tefillin and being called to the Torah. Unfortunately for him, it doesn’t mean being exempt from getting his cheeks pinched by older members of the community.

Ozeri photographed this celebration in a Sephardic synagogue in Mexico City, Mexico. The hard wooden Torah case pictured here is traditional in many Sephardic communities, in contrast to the cloth Torah covers used by most Ashkenazi Jews.

Mexico’s Jewish community is among the largest and most active in Latin America. The first Jews to arrive in Mexico came in the 16th century as Conversos—Jews who converted to Catholicism to avoid persecution but who secretly continued to practice Judaism. By the 19th century, the Conversos had generally assimilated into Mexico’s Catholic society. But the mid-19th century saw an influx of German Jews, followed by a wave of Russian Jews escaping anti-Semitism in the 1880s.

The next wave of Jewish immigration to Mexico came in the 1910s with the dissolution of the Ottoman Empire. These were Turkish Jews who were mainly Sephardic. The fact that they spoke Ladino—a language based on Spanish—helped ease their transition into Mexican society. Today, the Mexican Jewish community includes Ashkenazi Jews, Sephardic Jews, and Mizrahi (eastern) Jews, primarily Syrian immigrants. There are roughly 50,000 Jews in the country, mostly in Mexico City. The community is served by two dozen synagogues, several kosher restaurants, and at least 12 Jewish schools.

[Yehudah ben Teima] also said:
Five years is the age for the study of Scripture.
Ten, for the study of Mishnah.
Thirteen, for the obligation to observe the mitzvot.
Fifteen, for the study of Talmud.
Eighteen, for marriage.
Twenty, to pursue [a livelihood].
Thirty, for strength,
Forty, for understanding.
Fifty, for counsel.
Sixty, for sagacity.
Seventy, for elderliness.
Eighty, for power.
Ninety, to stoop.
A hundred-year-old is as one who has died and passed away and has been negated from the world.
– Pirkei Avot 5:24

Whoever teaches his son teaches not only his son, but also his son’s son – and so on to the end of generations.
– Talmud, Kiddushin 30a