About The Jewish Lens

Philosophy and Rationale        Curriculum Goals, Key Concepts, and Skills       About the Artist

The Jewish Lens program is a multi-session, sequential curriculum meant to be used with middle-school and high-school students, in day school, congregational school, and community settings.

The curriculum is designed to engage students actively in learning about the values that are important in their Jewish communities. It uses the arts as a means to help young people connect intellectually and emotionally with their traditions. Along the way, students develop skills in visual literacy, text study, and photography. By the end of the program, they gain competence and a sense of accomplishment in creating and displaying their own work.

These are some of the core elements of The Jewish Lens curriculum:

The Jewish Lens is designed to address the following goals, key concepts, and skills:

Through their participation in this curriculum, students will:

During this course of study, students will gain a deeper understanding of the following concepts:

Through this program, students will develop their skills in the following areas: 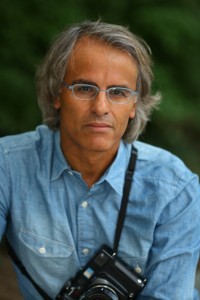 Zion Ozeri is a world-renowned photographer. In his travels, he has encountered diverse Jewish communities scattered across the world, and through his photographs he brings them together—depicting familiar customs, shared experiences, and a sense of home. His images speak to all who have altered, shaped, and reinvented their traditions, fusing old and new, familiar and unfamiliar to create rich, modern, meaningful ways of life.

Infused with a cross-cultural perspective and a mission to explore the diversity of Jewish life around the world, Ozeri captures the differences between these communities, as well as the many profound similarities that have endured across time and space. His photographs consider the forces that have kept Jews together as a people throughout the millennia and reflect on what binds Jews to their faith and to one another. Ultimately, his work asks viewers to ponder universal questions about what unites all people in their common humanity.

Zion Ozeri graduated from the Fashion Institute of Technology and Pratt Institute, both in New York City, where he received a Bachelor of Fine Arts degree. His photographs have been exhibited in many museums and galleries. His work has also been published in numerous books, magazines, and newspapers.

Jewish Lens Board of Directors

The Jewish Lens program is made possible by generous grants from The Covenant Foundation, UJA-Federation of New York, and private donors.

Copyright © 2009 Zion Ozeri / The Jewish Lens. All rights reserved. Student Worksheets and Handouts in Teachers section are intended for the educator’s use in the classroom. For this sole purpose, materials in this section may be reproduced. No other part of this curriculum may be reproduced or transmitted in any form or by any means, electronic or mechanical, including photocopying, recording, or by any information storage or retrieval system, without permission in writing from Zion Ozeri / The Jewish Lens.

The development of the Jewish Lens has been supported by: