Unit I. Through a Jewish Lens - Lesson 1: Reading a Photograph 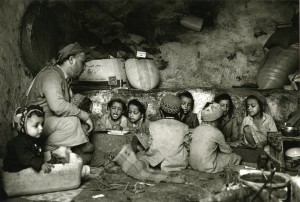 Differentiating between objective and subjective is like differentiating between evidence and argument. Just as a subjective observation must be based on objective elements, so too must an opinion or argument be based on factual evidence. Similarly, a multitude of arguments or opinions can often derive from the same evidence—although usually the most compelling argument will be the one that makes the most sense of the facts.
Help students understand the connection between the objective/subjective exercise and the way they build an argument in writing or in debate.
At times, it can be hard to know if a given observation is objective or subjective. In these cases, students needn’t get too hung up on the distinction—the objective/subjective dichotomy is merely a device to help students organize and reflect on their own looking.

Encourage students to support their subjective interpretations with objective observations, asking, for example, “Why do you think that?” or “What did you see in the photograph that made you say that?”

Explain to students the difference between p’shat and drash in the study of traditional Jewish texts. The p’shat is the simple meaning of a text; drash refers to its interpretation. Help students understand how these concepts apply to reading a photograph.

Ask students to log on to the Jewish Lens website (www.jewishlens.com) to view additional photographs by Ozeri and to learn more about the program.

Check out the Jewish Lens Photo Teaching Guide for photography tips and guidelines.